She represented pop and rock culture before it was en vogue. She was avant-garde at a time when most people didn’t even know what the term meant. Feminist and punk when it was not in fashion yet. Ela — everybody who is anybody in art or culture in Düsseldorf knows her. She was never just part of the scene — but one of its motors. Ratinger Hof, Academy of Art and Joseph Beuys — Gabriela Holscher-Di Marco, known as Ela, was part of it. And she still is! This year she is celebrating the 40th anniversary of her concept store ELA selected. An absolute rarity, particularly these days when it is far from easy for owner-managed retail businesses to win the fight against the big online players.

Ela has always been keen on fashion. It was not unusual that the former hairdresser spent 280 DM of the 350 DM that she earned for snake leather cowboy boots. In her early years, she used to work at the Breidenbacher Hof. Legend has it that she gave Mireille Mathieu her famous bowl haircut. And thereby one of the most distinctive looks of German music history was created.

In 1977, she opened her first shop on Gustav-Poensgen-Straße. Her son was still small, but it did not stop her from realising the vintage concept that focused on the 1940s, cowboy style, and work wear. Ela was one of the first to bring Levis Jeans to Germany. Something that was not available before. This mix was well received, especially in the Art Academy scene. Her shop became a meeting point of artists and musicians. The band Kraftwerk for instance found shirts and ties for the cover of their album The Man-Machine (1978) in her shop, Die Toten Hosen put their outfits together here, and the dungarees from the music video “Come on Eileen” of Dexys Midnight Runners (1982) came from ELA selected as well.

Art has been and continues to be part of her life. It has been and still is the natural, logical environment in which she moves. Ela was young, beautiful and at the centre of it all. Her encounters with Joseph Beuys have shaped her thinking until the present day. Joseph Beuys developed an “extended concept of art” and invented the “social sculpture”. In addition, he created a furore with the statement that “everyone is an artist”. When he was fired from the Academy of Art in 1972, it provided him and his master students with even more room to manoeuvre. Their action and thought influenced an entire generation. Ela was at the centre of it and has kept this attitude until today. The foundation of the worldwide reputation of the Düsseldorf art scene and its symbiosis with the Ratinger Hof helped to develop a scene that can only be compared to the New York of the 1980s.

There have always been different passions driving Ela resulting in this diverse mix. Neither would have worked without the other. In her boutique, she has always been working with artists, organising happenings and was cross-over before the term was even coined. Close friends with important artists from the Düsseldorf Academy of Arts, her shop is one of the first concept stores in Germany. Jan Schüler, Frank Bauer and Achim Duchow of the Düsseldorf Academy of Art exhibited their work in the shop — nowadays their works can be seen in international museums.

From 1989 onwards, avant-garde became a major talking point. The entire concept changed and Ela’s was the first place in Germany where you could get the early Belgian designers. However, Vivienne Westwood, Hannes Roether, Gaultier, Bernhard Willhelm, Kaviar Gauche and Raf Simons and the limited premium line Levi’s RED should also be mentioned. The promotion of young designers has been and still is a cause close to her heart. Ela was the first to introduce designers such as Henrik Vibskov or MM6 Maison Margiela in Germany. For young, emerging labels, Ela was the first sponsor who was courageous enough to represent the younger generation. Ela’s feeling for zeitgeist and change have made her store to one of the internationally best known boutiques. Like-minded people and retailers have taken on her vision.

After several other locations, Ela and her concept store moved to Fürstenplatz where she stayed for 25 years. In 2011 (after a short guest appearance on Hohe Strasse in Carlstadt), she ended up in Unterbilk on the former factory premises of the Liesegang-Projektion. With the workshop in the upcoming area of Unterbilk, Ela Holscher-Di Marco and her husband Antonio found the ideal space for their vision. Among their immediate neighbors are artists, designers and creative people, but cafés, restaurants, galleries and boutiques are also in the vicinity.

„The princess of Fürstenplatz“ (PRINZ Magazine)

In 2012, her own label followed as a logical consequence. A collection that is definitely up-to-date due to its approach to make “the best fabrics and the best cuts” into “good” clothing beyond fashion trends. Circle, square, triangle, and cross are the basic cuts to which every piece of ELA selected collections can be traced back. Clear geometric forms that dispense with classic dress sizes and are mostly gender neutral. The pieces are mainly one size and can be individually fitted by ruffling and tying. As to the material, the focus is on black in all its shades – and on a completely sustainable production in Germany. Gabriela Holscher-Di Marco has remained true to her concept — until today, collections for women and men of established labels and of many young designers are offered exclusively. And, in addition, accessories, magazines, perfumes, beauty and lifestyle products and art pieces such as the Kinderstern (Star for Children) pin — a charity project of the artist Imi Knoebel.

Hardly any person is as much subculture and Düsseldorf at the same time as Ela is. It goes without saying that this woman is an inexhaustible source of exciting events and fantastic stories. A huge archive with pictures from various decades document Ela and the times from a very private and intimate perspective. Insights into her private life, photos of her first road trips to the United States in the hunt for original vintage pieces, or snapshots of parties and exhibitions. More stories, people and events that would normally fit into a life- time. By a woman who impersonates lived feminism, art and chaos, music, culture and contemporary history. Who has always had an attitude towards politics and society and lived a totally wild life without being wild herself. 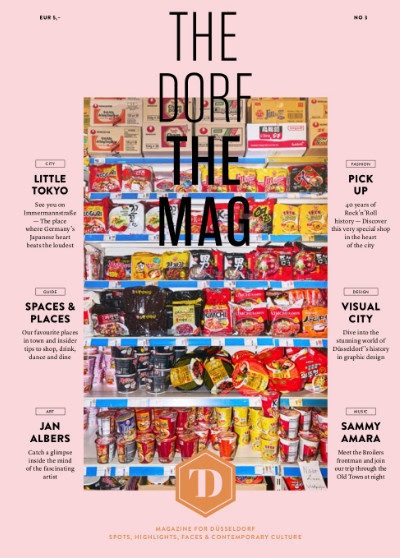