Not just hip-hop and streetwear make a perfect match. Also the lines of this legendary rapper of the “Golden Era”, the Brooklyn of the 90s, sound as casual as they are ingenious. On the occasion of the launch of the new AFEW streetwear collection, Masta Ace performed his best songs, together with composer Miki Kekenj and the takeover! Ensemble in a unique classical version on January 23, 2020 in the Tonhalle Düsseldorf.

Masta Ace is a real East Coast classic, along with names like Big Daddy Kane, Biz Markie, Craig G, MC Shan, Kool G Rap and Marley Marl and he was also part of the legendary Juice Crew, an 80s hip hop collective. The song “Born to roll” led to his breakthrough in the 90s. But even still three decades later, the boom bap style rapper is far from lacking creativity. His latest album “A Breukelen Story” was released two years ago, developed in cooperation with hiphop producer Marco Polo and which creates a feeling of nostalgia, paired with real old school sound.

We met up with Masta Ace to chat about Düsseldorf, Brooklyn and the art of constant reinvention and timelessness. (german version)

What brought you to Düsseldorf? I’ve performed in Düsseldorf a few times, over the years and during one of my travels throughout Germany and Europe, I met the guys from AFEW. Marco and Andy then had the idea to do something with an orchestra. And I was like yeah that sounds like a dope idea, I never thought something like this would happen! And it literally almost took five years of us talking about it, until they were finally able to put it all together. And here I am, ready to go to the Tonhalle and have a good time!

How did you manage to rearrange the songs over such a long distance between New York and Düsseldorf? I came in early and we were rehearsing all days until the day of the show to get everything tight. Miki the director wrote all the music for the band. It’s amazing to me because how they figure out to transform hiphop music in such a way. I mean in Hiphop we sample a lot anyways, also from this classical stuff. So, Mike wrote the notes and now the orchestra is reading their sheets and is playing along. It’s pretty cool! I’ve done performances with live bands and jazz bands before but this type of concert is the first time for me.

In a video by AFEW, in which you present the project of the new collection, you compare the sustainability concept of the sneaker with your career in a way that you have always reinvented yourself, or ”recycled“ yourself over time. What is your secret to becoming timeless? For me it’s continuing to be a fan of the music, that’s the first thing. You can’t get into this mode where you hate all the new music and it’s all terrible. Because then you can’t grow, you’re stuck in what you were. I’m not saying that you’re supposed to embrace every form of new music but be open to find good music. I’m always trying to find new artists that are putting out new music and that stuff recharges my battery, my creative juices. Like that’s the new level, thats the new standard now, let me see if I can create something that fits into that mode.

You are one of very few big HipHop MCs who are still active and successful. We can hardly hear and see anything new from the others. Why do you think that is? I don’t know what the reason is that some of my contemporaries don’t put out any music, perhaps it’s because they don’t have the same passion to write and make music. The passion never left me, I’ve always been motivated outdo myself, and I’ve felt like I’ve never proven myself. So for that reason, every time I go to a studio, I’m still trying to prove to my contemporaries that I belong, its like the underdog mentality. My fans they would probably I’m not underdog, but in my mind, not ever getting that sense of full acceptance from my contemporaries is what has made me keep making music and keep writing rhymes and that’s been one of the driving forces for me.

Why is your last album released in 2018 called „A Breukelen-Story“ and which story does it tell? It tells the story of my producer and friend, Marco Polo. He moved from Toronto, Canada to Brooklyn New York to try to pursue a life in the music business. He wanted to become a Hiphop producer so it was his journey. I just thought his story was so amazing. He only had a few bucks in his pocket, told his dad and his mum “I’m moving to New York, I’m gonna figure it out” and he came out there and had enough money to live in new York for a year, but after a year he didn’t know what was going to happen. Maybe he was going to have to com back home. He then tried to apply for internship in different studios and got turned down like a million times. Eventually he landed at the studio called the “Cutting Room” and that was the beginning. I decided to write the entire album based around his life.

We spelled it Brooklyn like the Dutch way, because in history the Dutch have settled in North America and the name was given to the city. This was kind of a parallel in my eyes, Marco leaving Canada to move to Brooklyn and the people from Netherlands leaving to a new world.

As a rapper you are very talented with words and you tell whole stories in your lyrics. Why do you think hip-hop and rap combine lyrics and music in the best possible way? I’m a writer at heart. Separate from the music part of it, the act of writing, whether its a song or short story, or script, thats when I feel the most comfortable. I’m also writing a script right now for a musical and my intention is to bring that to Europe. It’s going to be a full production with actors and parts and everything.

As I said I’m a writer at heart, so the music, the beats, that’s just a piece of it. At the end of the day what I’m doing is writing, creating and story telling.

When and how do you feel like a real Brooklynite? It’s gonna sound terrible but once you get that moment where you’re really rude to a stranger. Because in Brooklyn we’re all very stand-offish people, we’re not friendly and that’s just our nature but it’s really a defence mechanism, because there’s always these hustlers trying to steal your money or rob you, so everybody has built up this shell. So if you come to Brooklyn and you’re the nicest person and you’re saying hello to everybody, guys are going to be looking at you like you’re crazy. And that’s not gonna be until something happens to you that you’re like, okay I got to watch my back and you become paranoid about everybody and everything. And once you’re in that mode of observing everybody in the room, like what’s he up to, what’s he doing, then you’re officially in Brooklyn mode. It’s terrible to say but that’s what it is.

What do you miss most when you’re abroad? My family – being at home with my wife and my daughter is what I miss the most. And I miss my bed a lot! I live in New Jersey now but Brooklyn is right across the bridge.

If you could eat Brooklyn what would it taste like? Wow! It would definitely have some grease, it would definitely be oily and be a heavy meal. Something that makes you want to go to sleep. Definitely not very nutritious.

Can you do a freestyle rhyme with “Düsseldorf?” “Rapper’s nowadays are super sof(t). but I’m chillin’ out with ma peoples in Düsseldorf!” 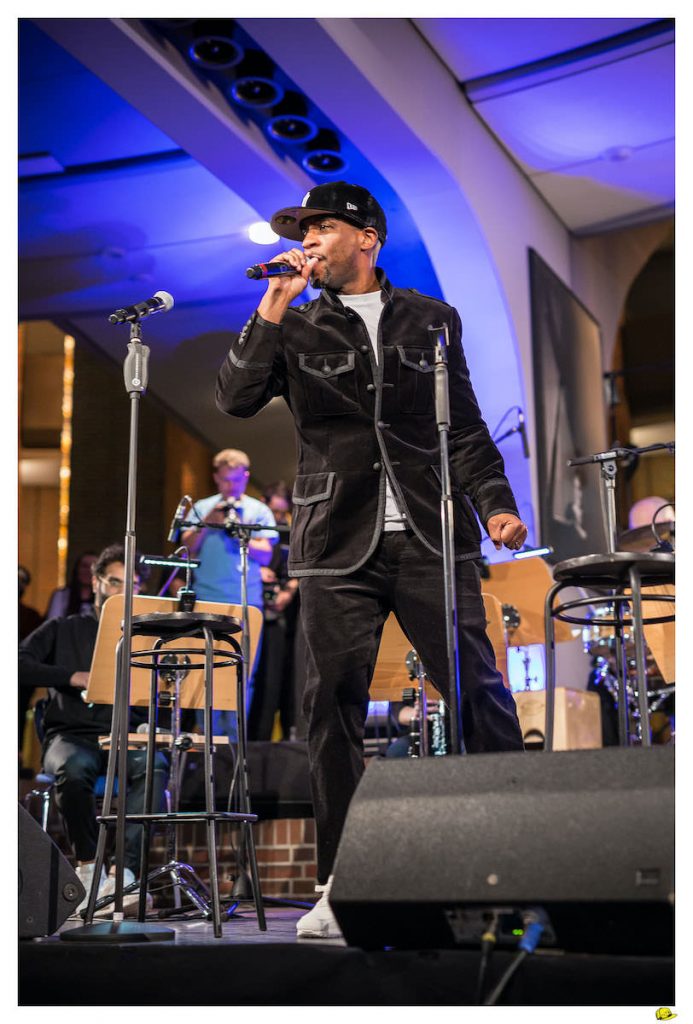 THE DORF THE MAG No