Stephan Lomp is an illustrator and graphic recorder. What is a ‘graphic recorder’, some might ask. Imagine life as a comic book.  You are talking and a speech bubble appears in front of your mouth. You fall down and it goes Peng and Ouch and a cloud of dust appears next to where you fell. In short, somebody draws a story parallel to your life on an overlaying transparent sheet. Something like that. Only it happens at conferences or speeches — so more can be remembered.

As a children’s book author (Catch me if you can, Mamasaurus, Wilfred and Olbert’s Totally Wild Chase etc.), the Düsseldorfer lets his imagination run wild with stories. His hidden object pictures are also so phenomenal that we simply had to have one in the magazine. As part of ‘Studio Rabotti’, he shares a workspace with six likeminded people where  the rough reality has to remain outside — different laws and pure creativity apply here! 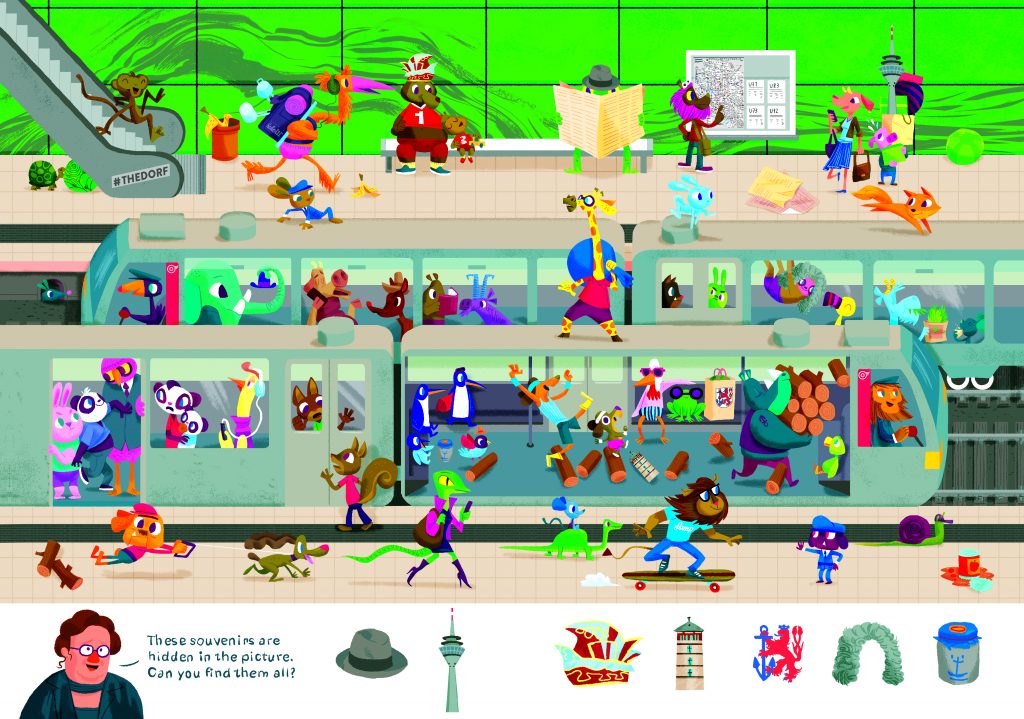 How would you describe the aesthetics of your illustrations? Colourful, reduced, playful and a bit quirky.

Where do you find inspiration for characters and stories? I find stylistic inspiration in old children’s books from the 50s to the 70s. It is astonishing to see how timeless some of these old works are. The acrylic illustrations by Alan Greé for example have similarities with modern vector illustrations, with the use of strong colours and brushstrokes. I would like to capture exactly this timelessness. Also a tour of the art academy can be inspiring. Maybe not directly for a children’s book but in order to get mentally away from work and to see what else is possible.

Why did you decide to create children’s books? As an illustrator, I can have lots of fun again with drawing and thinking up of little stories. In contrast to commissioned work, I can create the books I would like to have read as a child.

What is the journey from the first inspiration to the finished book? I present some rough ideas to the publisher. Together with an editor it will be developed until we have a text and concept. And then the development starts. Usually first with little pencil drawings and later with colouring at the computer.

Which artists and illustrators have influenced your style? For a long time, I was immersed in comics. I think the dark humour of Daniel Clowes and the quiet moments of Chris Ware have found their way into my first comics. The first ‘Mouk’ book from Marc Boutavant was an eye opener as well. It showed me that modern graphic design also has its place in children’s books. At a publisher’s party in London, I met Benji Davies who later became very  famous with his book ‘Stormwhale’. He also has more of a graphic design background; he works at the computer but his work still has a handmade quality. I think I am walking this middle ground, too.

Was it ever an option for you to leave Düsseldorf? Why did you stay? I have always kept the option open, the job situation was simply better here than elsewhere. By now, I don’t want to leave anymore because I appreciate to have a network of friends and colleagues here which I would have to establish again elsewhere.

THE DORF THE MAG No